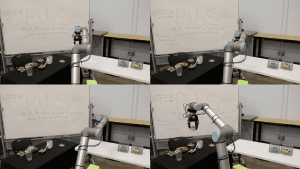 Consider the task of setting a dinner table. It involves placing the appropriate serving utensils and silverware according to the dishes being served. Some of the objects need to be placed in a particular order as they might be stacked on top of each other or due to cultural traditions. Many real-world tasks demonstrate such temporal characteristics that can succinctly modeled with linear temporal logic (LTL).

However defining sound and complete task specifications in LTL is non-trivial, and it remains desirable to allow robots to infer the task specifications through intuitive modalities like demonstrations, spoken instructions or corrections. Thus specifications for a task can at best be stated as a belief over candidate LTL formulas. An ideal learner would try to simultaneously satisfy as many of these candidate properties as possible while performing the task.

We tackle this problem in this work, where we introduces a novel problem formulation for planning with uncertain specifications (PUnS). To do that we first identify four evaluation criteria than capture the semantics of satisfying a belief over LTL formulas. These include:

We demonstrate our technique on the table-setting task where the task specifications were inferred from 30 demonstrations, and the policy computed using the PUnS formulation sets the table with a very low error rate (0.001%).

Synthesis of a Time-Varying Communication Network by Robot Teams with Information...