As robotic platforms have become more capable and autonomous, they have increasingly been utilized in time
sensitive applications such as search and rescue. To that end, a system has been developed for teams of robots to efficiently explore an environment, while taking sensor measurements. The system utilizes an information seeking algorithm that generates high priority points of interest based on the highest expected information gained per distance travelled. In order to coordinate multiple robots, the system partitions the area considered into different regions according to the effort needed to explore each region. Robots are assigned different regions to measure in order to minimize repetition of work and reduce interference between each robot. 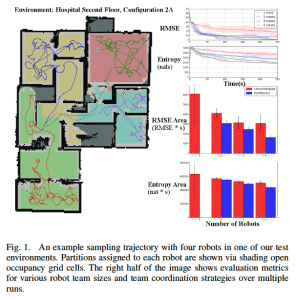 An information rate adaptive sampling approach is presented for tasking robots within an environment to gather sensor measurements. The approach has been evaluated within a simulation environment with one to four robots. Multiple robots are coordinated through our region segmentation approach. The data shows efficiency gains through the use of adaptive
information gain rate tasking above a naıve closest point approach. Positive results are also seen from using the region
segmentation technique. The algorithm has also been evaluated using real-world robots and results demonstrate consistent performance in real-world environments across multiple settings.