Recent work by the members of the DCIST alliance provides the first self-assessing algorithm for localization and mapping with noise and outliers. The presence of outliers is one of the main causes of failure for simultaneous localization and mapping (SLAM) systems operating in the wild. Perceptual aliasing, in particular, is a phenomenon where different places generate a similar visual (or, in general, perceptual) footprint. This causes spurious measurements to be fed to the SLAM estimator, which typically leads to incorrect localization and mapping. Another issue stems from the fact that most state-of-the-art techniques rely on a given trajectory guess (e.g., from odometry) to discern between inliers and outliers, and this makes the resulting pipeline brittle, since the accumulation of error may result in incorrect choices.

This paper provides a unified framework to model perceptual aliasing in SLAM and provides practical algorithms that can cope with outliers without relying on any initial guess. The paper presents two main contributions. The first is a discrete–continuous graphical model (DC-GM) for SLAM: The continuous portion of the DC-GM captures the standard SLAM problem, while the discrete portion describes the selection of the outliers and models their correlation. The second contribution is a semidefinite relaxation to perform inference in the DC-GM that returns estimates with provable sub-optimality guarantees. Experimental results on standard benchmarking datasets show that the proposed technique compares favorably with state-of-the-art methods while not relying on an initial guess for optimization. 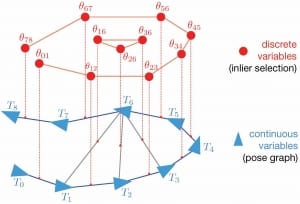 STRATA: A Unified Framework for Task Assignments in Large Teams of Heterogeneous...